Skip to content
September 12, 2019
A few days ago, Adidas's "Foot" design sneakers were designed for decoration because of its chain, which made people think of slavery. This very creative shoe is very similar to the ankle worn by former slaves because of its "ankle" design. It was accused of insinuating the 19th century American slaves and was questioned and criticized by various circles.

A few days ago, the adidas sports brand's flagship "Ankle" design sports shoes, because of its decorative chain design, can not help but think of slavery. This very creative shoe is very similar to the ankle worn by former slaves because of its "ankle" design. It was accused of insinuating the 19th century American slaves and was questioned and criticized by various circles. 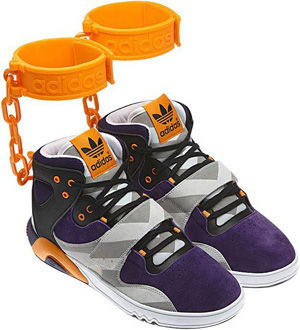 Adidas's sneakers that I designed with "ankles"

On June 14, this shoe was released on Facebook and it caused many fans to be angry. Most netizens believe that this shoe promotes slavery and completely violates black human rights. Thousands of netizens have accused Adisas of being "ignorant" and "offensive to black African-Americans." He also called this shoe a "slave shoe." Adidas also made a public apology for this, saying that it will withdraw this sneaker from the market immediately, and the sales plan scheduled for August in the United States can only be rushed.

It is reported that the design principle of the sneakers named "shackle sneakers" is decorated with orange rubber chains. It is meaningless to be called by the American black-people power activist Jesse Jackson. "We remove the anklets from our feet again." Put on our shoes, this is no improvement at all."

Jesse Jackson believes that Adidas's sneakers reflect the image of the black slaves. It is ignorance and offense to use the history of black slaves over 200 years as commercial gimmicks.

To this, Adidas issued a statement: â€œThis sneaker designed by designer Jeremy Scott has nothing to do with black slaves.â€ Before launching the market in August, we chose to take the lead in exposing this sneaker at Adidas Originals. At the same time, we are also accepting support and criticism from the outside world. Of course, if this design is offensive to others, then we apologize for this. At present, we have canceled the relevant plans to put it on sale."

Why can a design with a chain of shoes cause such a large impact on all walks of life?

The black professor Boys Watkins of Syracuse University in the United States also put forward his own opinion on this sneaker. Adidas's design of this â€œchain shoeâ€ is indeed similar to that of the American black slave at that time. The ankle reminds people of that sad history.

However, some people think that this design is only part of the shoes, do not have to see this problem so serious. However, large enterprises still have to bear certain social responsibilities. When launching new products, they should first consider various factors and then decide.

We have a variety of shorts, ranging from knee-length short trousers that can in some situations be worn as formal clothes to beachwear and athletic shorts. Ours are full of print, punch and personality. Shorts are just perfect in a hot summer weather when comfort and air flow are more important than the protection of the legs. By using various materials like cotton, chiffon, chambray or linen, we boast a high reputation for comfort, leisure and fashion.