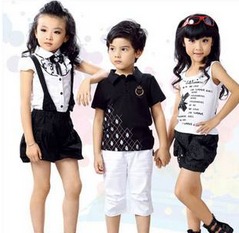 According to the â€œChina Children's Wear Industry Development Research Reportâ€, with the arrival of the birth peak, the market scale of children's wear in China will reach 100 billion yuan in 2013, and the children's clothing industry will usher in explosive growth. According to industry analysts, the activeness of the children's wear market is closely related to the concept of consumption of â€œafter 80â€²â€² parents. Their strong purchasing power and new concept of consumption, coupled with the â€œ4+2+1â€ family structure in the city, led to the emergence of six parents who were arguing for a single child.

According to the dean of the Hong Kong Institute of Clothing Technology, Zhou Shikang, â€œThe first session of the special designer category selection competition held during the 2013 Guangdong Fashion Week selected the first session and used children's wear as a pilot to select the â€œTop Ten Children's Wear Designers in Guangdongâ€. The selection of children's clothes as the pilot for the first category of special designer selection activities at Guangdong Fashion Week was enough to see the high expectations of the industry for the future development prospects of the children's wear market and the importance of cultivating and promoting talents for children's clothing designers.â€ Hong Kong Apparel College President Zhou Shikang said in an interview with the media.

In recent years, the Hong Kong Institute of Fashion Guangdong Fashion Vocational Training Institute has focused on cultivating middle- and senior-level clothing designers. Based on their own characteristics and hobbies, they have actively nurtured children's wear designers, tailored learning plans and schedules for students, and planned individual students. Development, to achieve the rapid success of students.